Walking out of the office at lunchtime, I caught myself humming the theme to Hogan’s Heroes. I guess that tells you how I feel about work.
The weather in London is incredible today. I nearly fainted with joy when I smelt freshly cut grass in the sun.
I’m getting really excited about Milan. It’s moments like this that I’m reminded how far I’ve come. I find it hard to remember the days when an Easter break down the Great Ocean Road seemed huge.

Pete Waterman, of Stock Aitken and Waterman infamy, says “I love this stuff, maggots and all”.

According to Boots.com, “Freckles are back. Nothing sets off the country girl, spring colours than a face full of deliciously playful freckles. If you’re not lucky enough to be blessed with naturally speckled cheeks, why not invest in the latest trend in make-up, a ‘freckle crayon’? Simply dot randomly over the cheeks and nose for a cuter than cute complexion.
To help you achieve this look try: Lanc 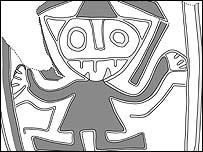 “This image of a god or goddess with a fanged mouth and clawed feet may be the oldest religious icon in the Americas. According to archaeologists, it pushes back the dawn of religion in the area by 1,000 years.”
Is that not the cutest god you’ve ever seen?

According to workthing.com, “[t]he consensus among recruiters is that demand for IT staff will not improve until 2004 or 2005.” 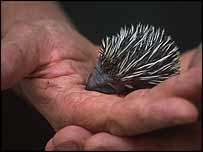 owasp.org: “The Open Web Application Security Project (OWASP) is an Open Source community project staffed entirely by volunteers from across the world. The project is developing software tools and knowledge based documentation that helps people secure web applications and web services.”
http://www.toontracker.com/ – clips of old cartoons.

Did I mention I’m going to Milan for Easter? I’ve already booked my tickets for the Last Supper.
We spent a night in Bergamo on the way back. (http://www.apt.bergamo.it/primo%20menuuk.htm and http://www.italyheaven.co.uk/bergamo.html).

Dear god, no.
Age: “Former Victorian Premier Jeff Kennett today suggested he could return to state politics after the Bracks government revealed a looming $1 billion budget blowout to maintain the state’s public transport system.
Treasurer John Brumby has blamed the public transport mess on the Kennett government, saying its privatisation of the system had been flawed.
But Mr Kennett hit back on radio today, saying he might be forced to return to politics if the government was unable to manage the state’s finances.”
…
“Mr Kennett said public transport privatisation was not flawed, and the government should have held the private operators to their contracts rather than bailing them out.”
He’s either a dirty big liar or he really is the only person who didn’t realise his privatisation of the public transport system would end up costing the taxpayer lots of money.

BBC: “The Paris daily Le Figaro says the inventor of the term “Shock and Awe” would now be a millionaire if employed in advertising.
It reports that the US Marks and Brands Office has received 15 applications to use the phrase, from – among others – firms selling pesticides, washing-up liquid and underwear.
The paper adds it would be a pity if the name were awarded to the first applicant, Sony, for its video war game.
“A slogan too close to the product kills it. Shock and Awe on a console where you massacre the enemy with napalm… trivializes the subject,” it observes.
“Whereas printed across a pair of swimming trunks, the term becomes far more surprising and full of promise.””
Ooh, those cheeky French!