Number of EU myths debunked by the European Commission

I can’t quite believe we’re actually having a referendum on this, but hey ho. So here are some reasons to vote against leaving the EU.

1. We get the MEPs we deserve. If you want better representation for Britain in the European Parliament, then stop voting for UKIP and other parties who will just take our money and piss it away instead of turning up to votes.

2. Leaving the EU will not save Britain from TTIP, Caroline Lucas warns

4. 10 points to consider about Brexit and the EU Referendum by Andy Williamson

‘What did the EEC/EU ever do for us? Not much, apart from: providing 57% of our trade; structural funding to areas hit by industrial decline; clean beaches and rivers; cleaner air; lead free petrol; restrictions on landfill dumping; a recycling culture; cheaper mobile charges; cheaper air travel; improved consumer protection and food labelling; a ban on growth hormones and other harmful food additives; better product safety; single market competition bringing quality improvements and better industrial performance; break up of monopolies; Europe-wide patent and copyright protection; no paperwork or customs for exports throughout the single market; price transparency and removal of commission on currency exchanges across the eurozone; freedom to travel, live and work across Europe; funded opportunities for young people to undertake study or work placements abroad; access to European health services; labour protection and enhanced social welfare; smoke-free workplaces; equal pay legislation; holiday entitlement; the right not to work more than a 48-hour week without overtime; strongest wildlife protection in the world; improved animal welfare in food production; EU-funded research and industrial collaboration; EU representation in international forums; bloc EEA negotiation at the WTO; EU diplomatic efforts to uphold the nuclear non-proliferation treaty; European arrest warrant; cross border policing to combat human trafficking, arms and drug smuggling; counter terrorism intelligence; European civil and military co-operation in post-conflict zones in Europe and Africa; support for democracy and human rights across Europe and beyond; investment across Europe contributing to better living standards and educational, social and cultural capital.’

Yeah, yeah, Cameron fucked a pig, the Bullingdon boys burn £50 notes in front of homeless people – but why do these stories matter?

What the British are really laughing about by Lawrence Richards:

‘David Cameron’s nasty little scandal speaks to a suspicion many people already have: that in British society, you don’t get to become Prime Minister because you’re talented or because you work hard. You don’t even get there just because you’re rich. You get there by traumatizing the homeless and skull-fucking a dead pig, and that ritual gives you power because you have demonstrated utter, pathetic submission to your fellow oligarchs.’

You might not care about getting married (I don’t) but equal marriage is about a lot more than that. From a piece in the Irish Times:

Saturday’s strong Yes vote is a statement that “it’s okay to be gay” in modern day Ireland, according to Minister for Agriculture and Fine Gael director of elections Simon Coveney.

Mr Coveney said that while the referendum was ostensibly about extending the rights of civil marriage to gay and lesbian people, it was also a statement about Ireland as a country.

“It’s a great day and no words can describe what it feels like but what it means is the Irish people in their strength of numbers have said we are all equal, we are all cherished under our constitution.”

“I respect those who vote the other way yesterday but we are a democracy and today we stand on the threshold of a new republic where liberty and equality are the hallmarks of what we stand for.”

a rainbow over Dublin today, after the Republic of Ireland voted yes to gay marriage equality pic.twitter.com/QF31uNUDZB 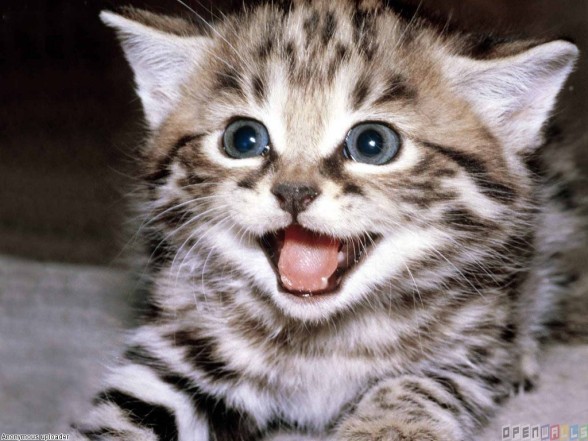 Here’s a picture of a kitten.

From ‘Why does Jeremy Clarkson get me so angry?‘ by @sturdyAlex

‘Now, I’m not for a moment suggesting a writer bears responsibility for ways in which any wicked person might misunderstand his words. But I think it is also foolish to deny that people are propelled into action by a thousand spectral hands. If I discovered I had become the busty centrefold inside the door of the hate locker of a mass murderer, I would at the very least search my soul very deeply. Words matter. Words hurt. And the higher your profile, the bigger the responsibility not to pour venom into people’s ears. I think Clarkson consistently did that. He poured venom. Dangerously, he poured venom disguised as humour.’

People who misread comments and spend too much time arguing against points you didn’t make. See also: people who have to have the last word.

People who @-mention you in conversations you haven’t been involved in. That’s just odd.

Great question, and it was reported just about everywhere. Interestingly, the original blog post by Joshua Kurlantzick was called ‘Tony Abbott Has To Go‘, and you should read the whole thing, but first let’s just all take a moment in our busy lives to appreciate some quotes from the original piece:

in less than two years as prime minister, Abbott has proven shockingly incompetent … so incapable of clear policy thinking, so unwilling to consult with even his own ministers and advisers, and so poor at communicating that he has to go.

Abbott’s policies have been all over the map, and the lack of coherence has often made the prime minister seem ill-informed and incapable of understanding complex policy issues.

… In addition, he appears to have one of the worst senses of public relations of any prime minister in recent Australian history. At major economic summits, he has embarrassed Australia with his coarse rhetoric.

And for bonus points, Mother Jones on Abbott: ‘One of the World’s Worst Climate Villains Could Soon Be Booted From Office‘.