I had a hog-killin’ time last night, and other Old West slang.

BBC: “Electronic bugging devices have been found at offices used by French and German delegations at a European Union building in Brussels, officials have confirmed.”
Brusselsgate, anyone?

Apparently all it takes for me to swallow my principles and buy from Amazon is the chance to get an iPac for £23.03. Let’s see if it actually works.
Went to see a really good gig, Z Star at the Vibe Bar last night. 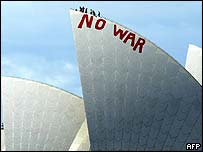 Princess Diana has been getting heaps of questions lately. Sometimes she struggles to answer, especially when she hasn’t had a coffee yet, so if you think you’ve got a better answer than hers, pop on over and leave a comment.

Nothing I can say, really, I’m just recording it because it makes it more real.
Howard says, “I’ve called this news conference to announce that the Government has authorised the Chief of the Australian Defence Force, General Cosgrove, to place the Australian forces already deployed in the Gulf region as part of any US-led coalition operation that may take place in the future directed in accordance with existing authority under United Nations resolutions to disarm Iraq.” (Age transcript.)
And at the press conference,
“JOURNALIST: If Australia is not at war with Iraq now, is there a point coming in the next few days, couple of days, when that will….
PRIME MINISTER: If you’re worried about or asking about whether some formal declaration of war is needed no it’s not because the action is being taken on our advice pursuant to existing Security Council resolutions. So there’s no formal declaration needed. ”
…
“JOURNALIST: Alright, when does the ultimatum run out?
PRIME MINISTER: Well the President will be making a speech in a few hours time and he will have something to say about that. But having now taken the decision to commit Australian forces to the coalition for possible future action, I am not going to speculate about when that might occur, that is an operational thing and I’m going to be very careful from now on not to talk about operational matters but to leave that to the military spokesman.”
…
“JOURNALIST: Prime Minister is it the case that only the three combatant nations, the US, the UK and Australia believe that they have the full authority of the United Nations to go to war?
PRIME MINISTER: I can’t speak for other nations, I speak for Australia and speaking for Australia we have a very sound legal basis for this decision. We have never needed the 18th resolution of the Security Council to bolster our legal case. That’s very clear, we wanted the 18th resolution to put more political pressure on Iraq. That’s the reason why we wanted it.”
In other statements, Howard cleverly turned into question of personal criticism into a plea not to criticise the troops themselves. Clever, because what kind of a bastard would hassle Australia’s brave future veterans? Nevermind that no-one’s talking about hassling them.

BBC: Four museums and galleries around the UK are competing for the inaugural Gulbenkian Prize – which carries a jackpot of

This wait to see if we’re going to war is like the anti-Christmas.
BBC: “The Security Council is scheduled to hold a closed door meeting at 1000 local time (1500 GMT) on Monday, a UN spokesman said.
White House officials suggest that if it quickly becomes obvious that no progress can be made, President Bush could address the American people on Monday night.
The BBC’s Washington correspondent says the speech will not be an immediate declaration of war, but it will give Saddam Hussein only a few further hours to leave Iraq or face an attack.”
Apparently, “Mr Blair pledged that in the event of war, Iraq’s territorial integrity would be protected and the country’s natural resources would be used for the benefit of the Iraqi people.” Does Bush know he said that?

People after my own heart: The Coffee Police.

I feel like starting a poll on when/if the US/UK/Australia will be at war with Iraq. It’s getting hard to take it seriously.
Age: “But Mr Howard’s speech to the National Press Club has been criticised by former intelligence analyst Andrew Wilkie, who said the Prime Minister failed to make a link between Iraq and organised terrorism.”
Has anyone made a convincing link between Iraq and terrorism?