I was looking for something else entirely when I came across the online diary of the Director of the Iraq National Library and Archive. It’s absolutely humbling. He doesn’t publish it anymore and explains why in his final entry. 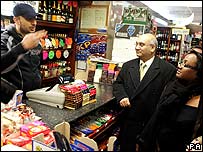 I can’t believe a bunch of posey politicians can go to the solidly middle class enclave that is Stoke Newington Church St and pretend they’ve braved the wilds of Hackney! The worst that could happen is that their latte accidentally has non-organic milk or they are hit in the ankles by a £1000 pram.
They should have some guts and walk down ‘Murder Mile’ on their own – nothing will happen, but at least they will have really proved the point.

Most of them are self-evident but it’s good to have the links.
Frequent Flyer points are a waste of time.
Facebook is a bit evil (but grumpy technology writers who miss the point that not everyone is within easy reach of every single one of their friends and family weaken their argument).

Howard only lost by a 1.5% swing, according to The Age.

Reuter’s Pictures of the Year 2007

BBC: Nepal court rules on gay rights
“Nepal’s Supreme Court has ordered the government to scrap laws that discriminate against homosexuals.”
BBC: Uruguay approves gay civil unions”
“Uruguay’s congress has approved a bill which would allow civil unions for both gay and unmarried straight couples.
It is the first country in Roman Catholic-dominated Latin America to approve such a measure nationwide. ”
Yahoo: Hungary legalizes civil partnerships
“Same-sex couples in Hungary will be able to register their civil partnerships, giving them many of the legal rights of married couples.”
And maybe Peru, if you help: Peru urged to protect LGBT youth, more on how you can help at http://www.iglhrc.org/site/iglhrc/section.php?id=5&detail=817

Australia’s new government has accepted seven Burmese asylum seekers being held in Nauru, signalling a wind-down of a controversial immigration policy.
Immigration Minister Chris Evans said admitting the group was a first step in dismantling the previous government’s so-called “Pacific Solution”.
…
Chief Executive of the Refugee Council of Australia Paul Power welcomed Labor’s move to change the policy.
“It (the ‘Pacific Solution’) was a failed policy that created great psychological damage to people who had committed no crime and undermined Australia’s international reputation on human rights,” he said in a statement.

This is super cool, in a geeky way: Ancient Roman road map unveiled

The Tabula Peutingeriana is one of the Austrian National Library’s greatest treasures.
The parchment scroll, made in the Middle Ages, is the only surviving copy of a road map from the late Roman Empire.
The document, which is almost seven metres long, shows the network of main Roman roads from Spain to India.

Klausmann and his crew are connaisseurs of the Parisian underworld. Since the 1990s they have restored crypts, staged readings and plays in monuments at night, and organised rock concerts in quarries. The network was unknown to the authorities until 2004, when the police discovered an underground cinema, complete with bar and restaurant, under the Seine. They have tried to track them down ever since.