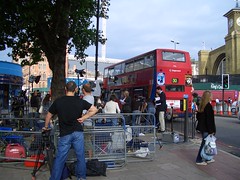 I don’t know why, but of all the things I’d expected to see at King’s Cross on July 7, it wasn’t lots of media units.
I’m never usually there that early but there seemed to be as many commuters as ever. The mood was generally determined and a bit sombre, but maybe everyone always looks that way that early in the morning. Lots of police and transport police everywhere.
More comments on the photos themselves on flickr.
There was a really cute sniffer dog who clearly saw more interesting things to be sniffing than a bicycle chained to a fence between King’s Cross and St Pancras, but I didn’t think the police would appreciate me taking a photo of it.